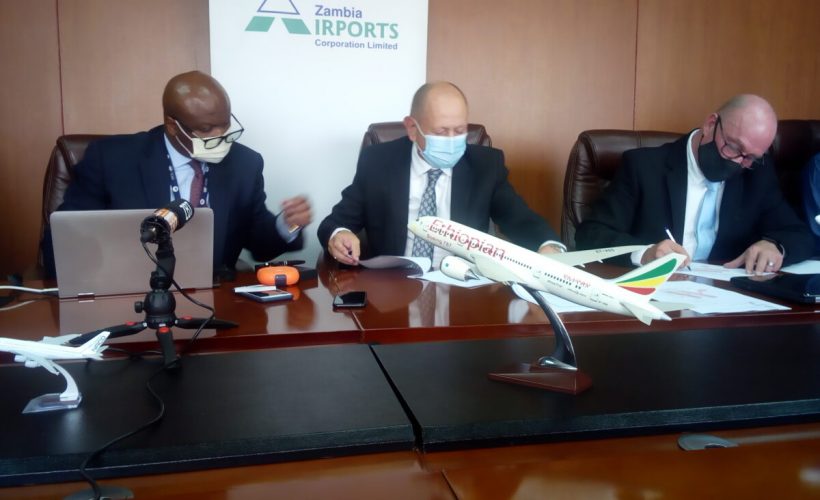 The Zambia Airports Corporation Limited – ZACL has signed a deal with Protea hotel that will see the hotel chain run the hotels at the Kenneth Kaunda International Airport – KKIA in Lusaka.

Managing Director of the ZACL Fumu Mundoloka stated during the signing event today 8 October 2020 that “it is a big day where we are signing off agreements for hotel management between ZACL and Protea hotel which will be operating at Kenneth Kaunda international airport”.

The deal has been signed on behalf of Protea group by Stephen Kwint who is the group operations manager at protea, Mauro Goardigli group general manager for Protea and Fumu Mundoloka Managing Director Zambia Airport corporation Limited.

And speaking exclusively to the Zambian Business Times – ZBT at the the event, Director for Commercial Services Brian Chintu stated that the building to house the hotel was completed in the year 2019. The hotel is a medium range type, not too high end and not too lower end. We want to cater for different aspects and types of passagers.

When asked on what criteria was used to select the hotel chain, Chintu stated “consideration Such as experience in the hotel business, local and international presence, proof of global distribution systems, demonstration of capacity from the financial and a technical perspective, the brand name were all part of the assessment process. These were some of the key considerations”.

The hotel building is on 2 hectare of land and the construction cost came to about US$10.5. The Commercial Director further told ZBT that the hotel has 72 rooms in total, Some rooms are in the new terminal, while others are in stand-line structure, but both are part of the deal.

The hotel management deal between ZACL and Protea has been signed for an initial period of 15 years, it is renewable and is a performance-based. After 15 years, the performance will be evaluated to determine the way forward.

Nevertheless, Some projections have set out in the agreement form how much the Zambia Airport corporation limited will be getting. It is estimated that in 2-3 years, the hotel will be stable and will be able to pay out for ZACL.

Protea had to beat three other hotels that showed interest to run to airport hotel. “There were other 3 hotels that wanted to get the operating contract, but protea was successful because it was the best offer and able to meet the required standards.