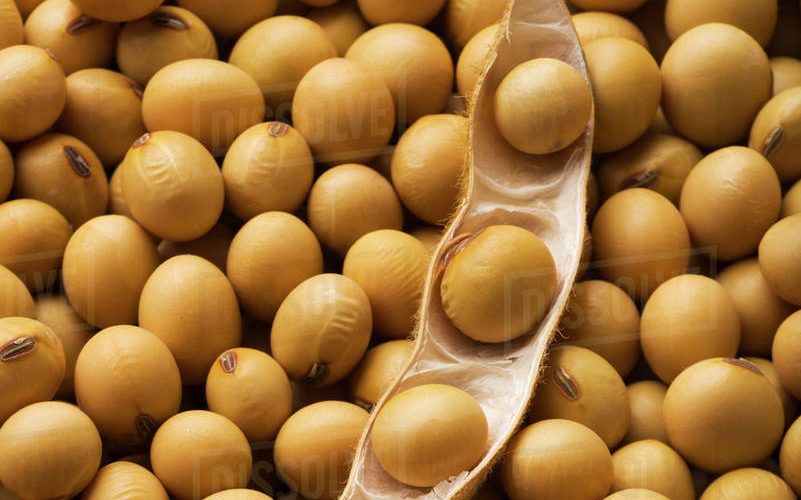 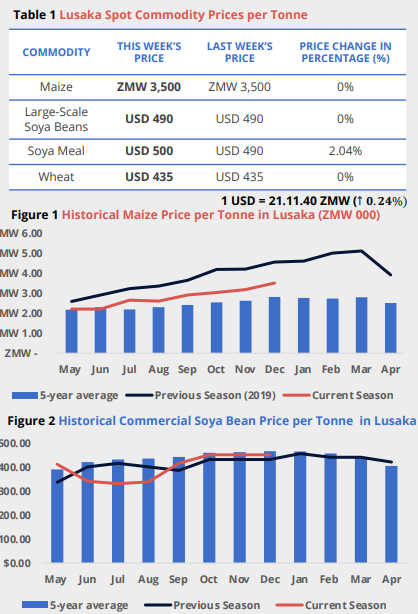 PRICE DRIVERS
Maize
• The maize supply and demand dynamics remain unchanged with gate prices ranging between ZMW 3,470 and ZMW 3,600 per tonne.
• The gate prices for maize aren’t indicative of the actual prices that maize processors are paying.
• Maize planting in the Northern and Eastern provinces has commenced with many farmers having delayed planting and opting to
plant lower yielding and earlier maturing maize varieties in the areas.
• While areas close to Zambia’s major cities in Southern, parts of Central, Copperbelt and Lusaka have received above average rainfall
and planted earlier than usual.
• The consequence could be lower yields this farming season.
• However, with the government increasing the amount of fertiliser it distributed early to small-scale farmers, we expect a larger
maize area planted.
Recommendation – Farmer: sell | Trader: sell | Miller: buy
Soya Beans
• The demand and supply dynamics of soya beans are unchanged.
• There is very little soya beans on the market and soya bean processors will have to moth-ball their plants.
• Most buyers are paying around USD 480 for large-scale produced soya beans that meets Zambian Commodity Exchange (ZAMACE)
standards.
• Producers of texturised soya beans (soya chunks/pieces) are paying USD 500, the most for the crop.
• The producers prefer to buy soya beans over soya meal because natural soya bean oil is a by-product of the production process.
• With soya meal prices between USD 480 and USD 500, the margins for texturised soya bean producers is much higher even when
they pay above market prices for soya beans.
• Additionally, with a weakening Zambian Kwacha that resulted in higher small-scale soya bean prices, we anticipate that there will be
a larger soya bean area planted in Central and Eastern provinces.
• While the delayed onset of rains in the Eastern province, the largest small-scale soya bean producing region in Zambia, may affect
yields, we do not expect the effect to be significant because rainfall and soil moisture in the area is adequate to produce soya beans.
Recommendation – Trader: hold | Crusher: buy
Soya Meal
• Spot soya meal price is at USD 500 a tonne
• There is very little uncommitted soya meal on the market and the price could rise further in January when we expect it to peak.
Recommendation – Trader: hold | Crusher: hold | Consumer (user of soya meal): buy
Wheat
• Wheat supply and demand remains unchanged
• Between 50,000 and 100,000 tonnes of wheat will imported between January and July of 2021.
Recommendation – Farmer: hold | Trader: buy | Miller: buy